Schematron is a rule-based validation language for making assertions about the presence or absence of patterns in XML trees. It is a structural schema language expressed in XML using a small number of elements and XPath.

Schematron is capable of expressing constraints in ways that other XML schema languages like XML Schema and DTD cannot. For example, it can require that the content of an element be controlled by one of its siblings. Or it can request or require that the root element, regardless of what element that is, must have specific attributes. Schematron can also specify required relationships between multiple XML files. 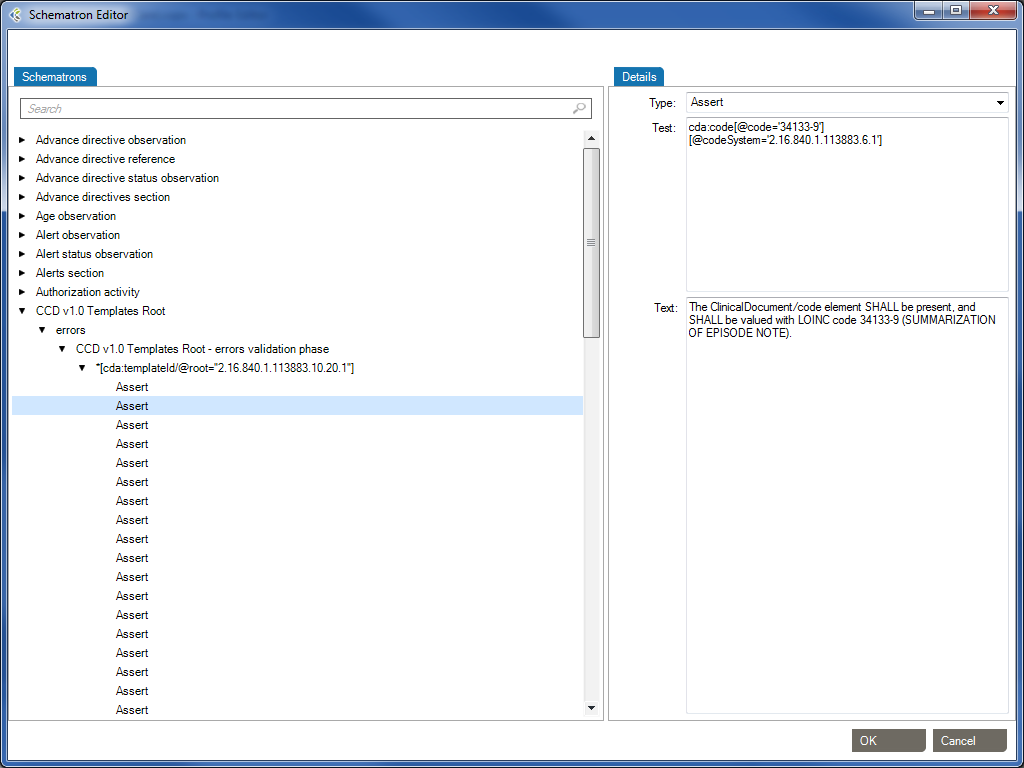 An Introduction to Schematron*

The Schematron schema language differs from most other XML schema languages in that it is a rule-based language that uses path expressions instead of grammars. This means that instead of creating a grammar for an XML document, a Schematron schema makes assertions that are applied to a specific context within the document. If the assertion fails, a diagnostic message that is supplied by the author of the schema can be displayed.

One advantages of a rule-based approach is that in many cases modifying the wanted constraint written in plain English can easily create the Schematron rules. For example, a simple content model can be written like this: “The Person element should in the XML instance document have an attribute Title and contain the elements Name and Gender in that order. If the value of the Title attribute is ‘Mr’ the value of the Gender element must be ‘Male’.”

In this sentence the context in which the assertions should be applied is clearly stated as the Person element while there are four different assertions:

In order to implement the path expressions used in the rules in Schematron, XPath is used with various extensions provided by XSLT.

It has already been mentioned that Schematron makes various assertions based on a specific context in a document. Both the assertions and the context make up two of the four layers in Schematron’s fixed four-layer hierarchy:

The bottom layer in the hierarchy is the assertions, which are used to specify the constraints that should be checked within a specific context of the XML instance document. In a Schematron schema, the typical element used to define assertions is assert. The assert element has a test attribute, which is an XSLT pattern. In the preceding example, there was four assertions made on the document in order to specify the content model, namely:

Written using Schematron assertions this would be expressed as

If the condition in the test attribute is not fulfilled, the content of the assertion element is displayed to the user.

Each of these assertions has a condition that is evaluated, but the assertion does not define where in the XML instance document this condition should be checked. For example, the first assertion tests for the occurrence of the attribute Title, but it is not specified on which element in the XML instance document this assertion is applied. The next layer in the hierarchy, the rules, specifies the location of the contexts of assertions.

The Assert type element is used to tag positive assertions about a document.

The Report type is used to tag negative assertions about a document.

Since the rules are used to group all assertions together that share the same context, the rules are designed so that the assertions are declared as children of the rule element. For the previous example, this means that the complete Schematron rule would be

The name of the pattern will always be displayed in the output, regardless of whether the assertions fail or succeed. If the assertion fails, the output will also contain the content of the assertion element. However, there is also additional information displayed together with the assertion text to help you locate the source of the failed assertion. For example, if the co-occurrence constraint above was violated by having Title=’Mr’ and Gender=’Female’ then the following diagnostic would be generated by Schematron:

By moving some of the logic from the assertion to the specification of the context, the complexity of the rule has been decreased. This technique is often very useful when writing Schematron schemas.