Suppose that your team is working on creating an HL7 backend. You’re tasked with writing the tests to ensure that the engine works as expected. However, the engine is not actually available for testing yet. You still want to write as much of your validations as possible to speed up development.

When using the Caristix Scenario Editor, you can fake the execution of your tests so that the validation step is fully written.

Note: This tutorial uses the same mapping engine and uses similar tests to the field mapping tutorial. It is recommended that you read through that tutorial if you’re not familiar with HL7 message validation or with batch message validation using the Caristix Scenario editor. If you’ve already completed that tutorial, you can re-use the scenario you created for this tutorial.

Overall, your test needs only a single task. That task will pretend to send messages, but will bypass your mapping engine and simply fake the response messages. After that, it’ll validate that the received messages have their PID.8 Field properly transformed. 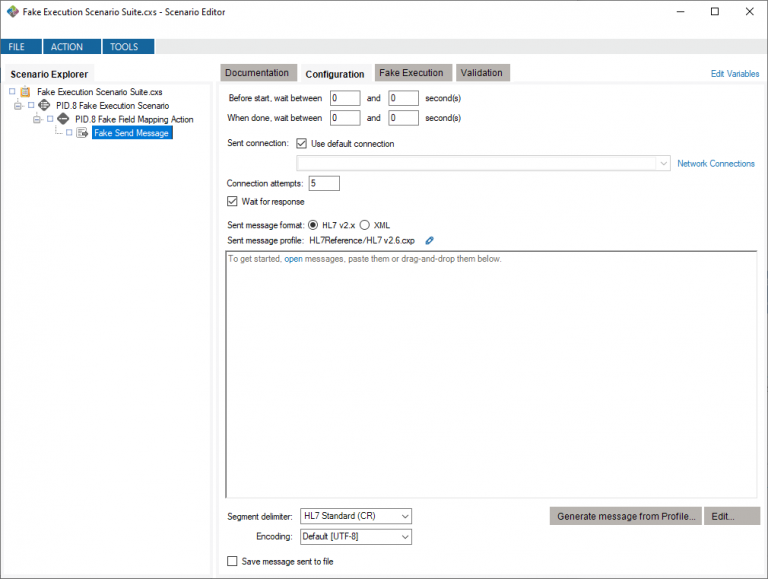 Start by adding the following message in the configuration tab: 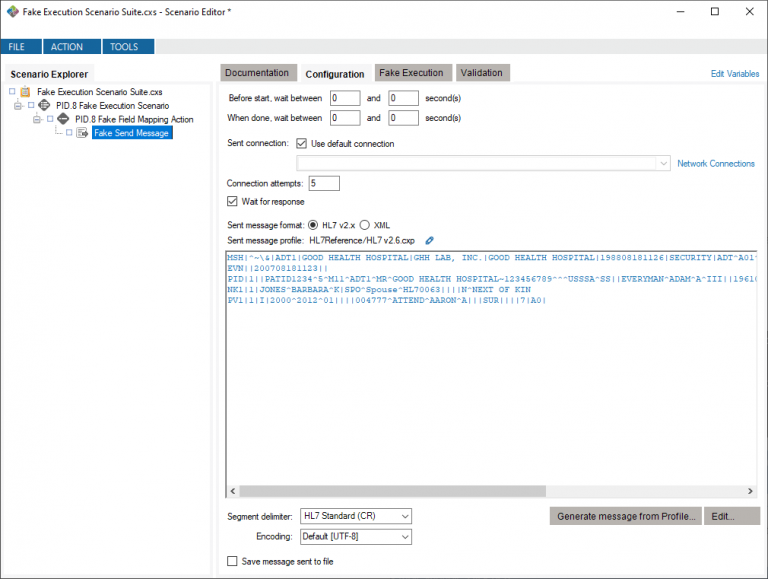 Note the emphasis on the PID.8 field, which is defined by the ${PID.8} variable. You’ll need to add a variable by that name that refers to the first column of the mapping table. 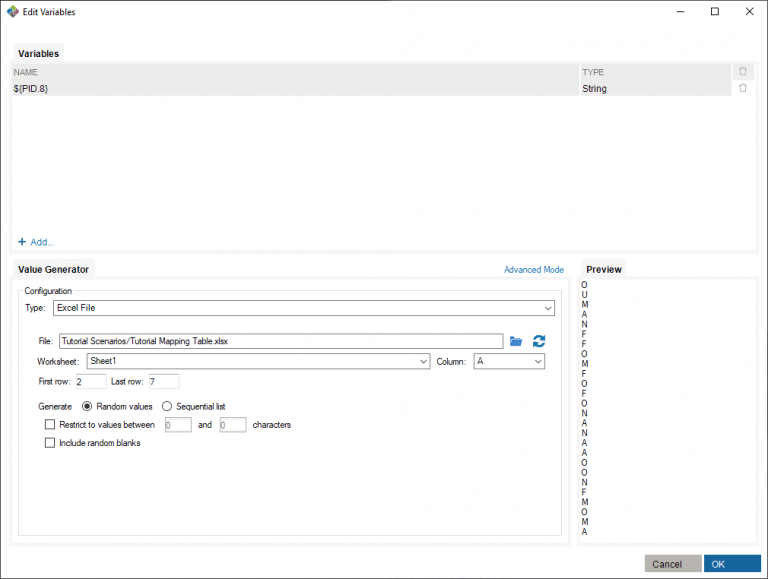 Tip: To get to know how to create a mapping table variable, click here.

You can fake the execution of a task by going into the Fake Execution tab of a task. There, you can use the Scenario Editor’s JavaScript engine to make the test receive specific messages. You can also use Carlang expressions to obtain fields from the sent message.

First, you want to create the newPid8 local string variable, which will be the mapped value of the sent message’s PID.8 value. You’ll first need to create a Scenario Editor variable, called ${GenderMapping}, that defines the mapping table. 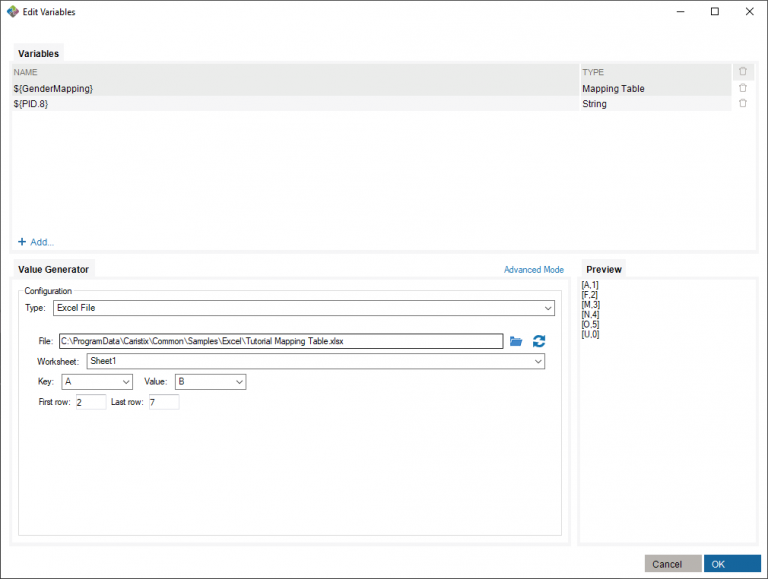 You can use the ${GenderMapping} variable in the Fake Execution tab. Simply define your newPid8 variable as ‘${GenderMapping[@HL7(“PID.8”)]}’ much like you would define an expected transformed value in a validation – the @HL7(“PID.8”) value refers to the PID.8 field of the sent message. 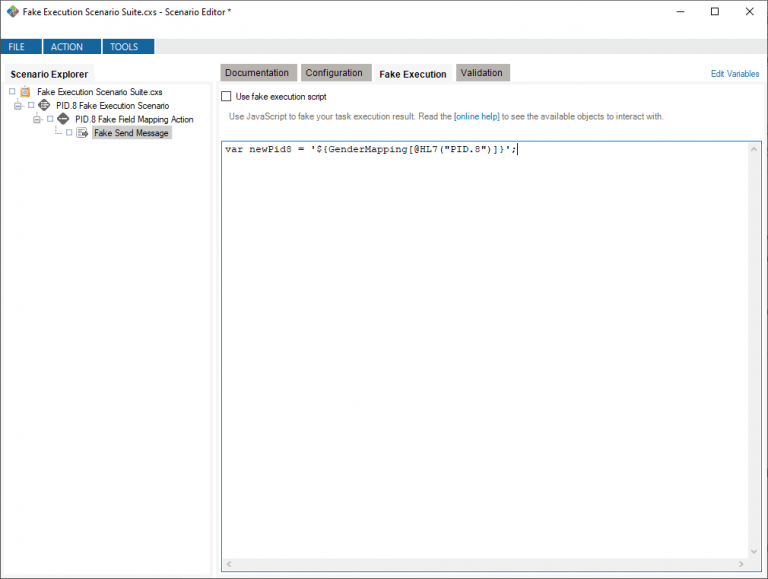 Returning a message with Fake Validation

Next, you want your Fake Execution to return a response message. You can return messages with Fake Execution by using the “callback” method, which a string as input and returns the corresponding content to the test’s validation.

You’ll want to provide the return message, which you can copy from the message in the Configuration tab. To preserve the message’s segment terminators, use backquotes to surround the copied HL7 message. You’ll also want to replace the message’s PID.8 Field with the newPid8 JavaScript variable. Overall, the callback method should be used as shown below. 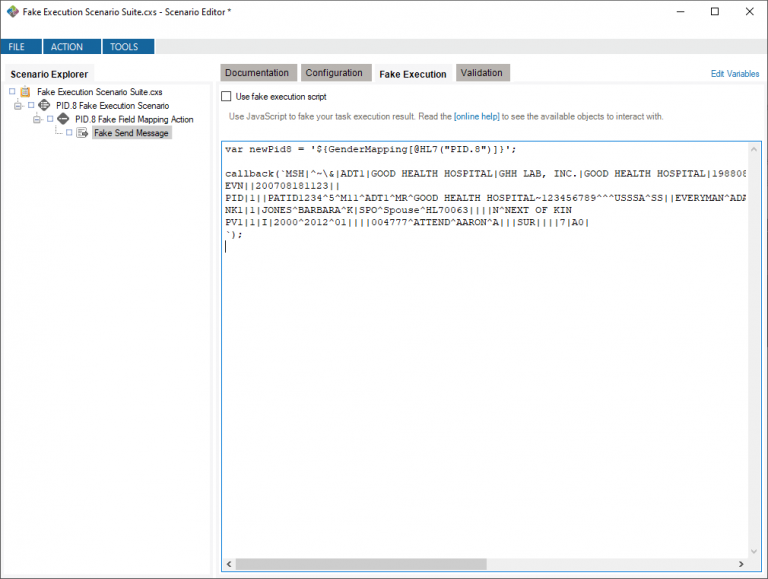 Finally, you need to check the “Use fake execution script” box to make sure that your Fake Execution is performed instead of attempting to send a message to a real connector. 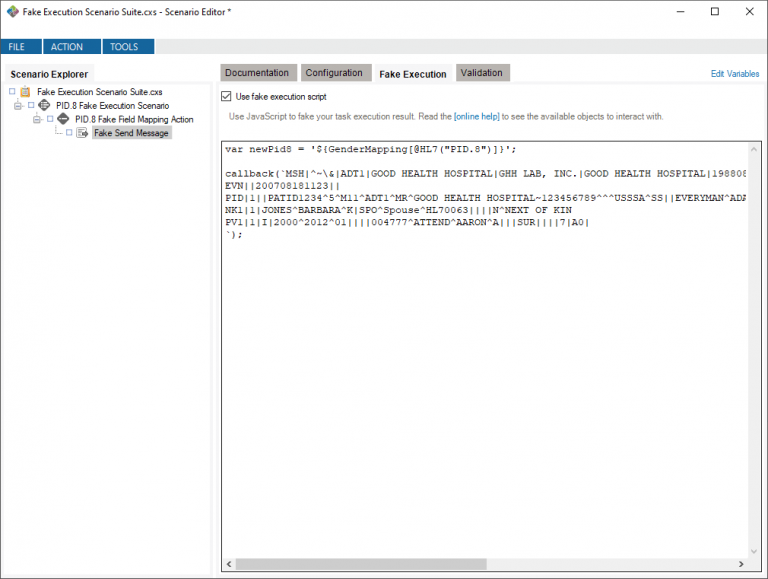 The final step to this tutorial is to simply validate that the fake mapping was performed successfully. In the Validation tab, add a validation for the PID.8 Field. The value of the response’s PID.8 Field should be equal to the sent message’s PID.8 Field when mapped to the mapping table, so the criterion’s value should be the same as the Fake Execution’s transformation: ${GenderMapping[@HL7(“PID.8”)]}. 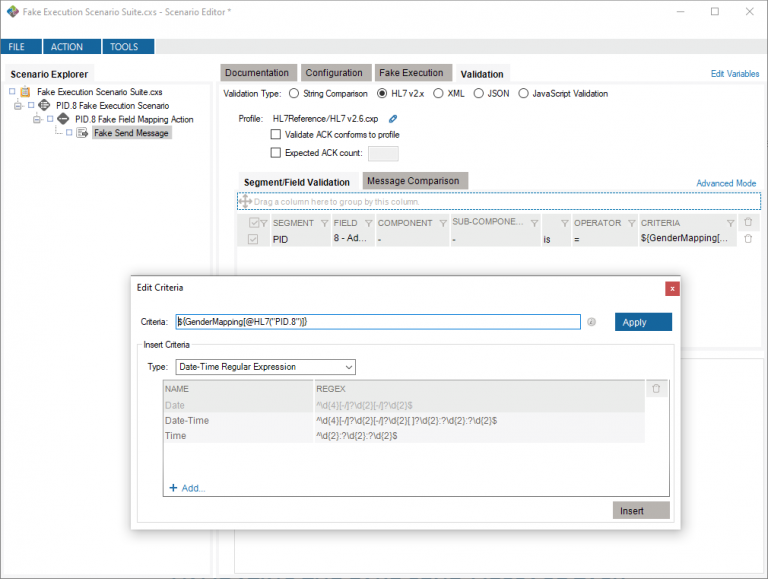 If you run the scenario, you will see that the test succeeds, despite the task not reaching an external connector.

If you want to view the completed project, you can download the project created during this tutorial and the accompanying Excel document by clicking here. You’ll need to place the Excel document in the Excel samples folder: C:\ProgramData\Caristix\Common\Samples\Excel