Caristix Workgroup enables you to load test plans that can be run repeatedly. This section explains how test plans are structured and configured and how test messages are built.

Suites are analogous to a test plan; a suite contains all of the clinical scenarios and workflows to run in order to validate that an interface works.

Suites, in turn, contain scenarios, which represent the clinical workflows mentioned above. An example of a scenario would be a med pass, which would include a patient arrival, a series of lab orders and results, medication orders, etc.

A scenario consists of a series of actions. An action would represent one of the steps in a med pass — for instance, the arrival of a patient.

Actions are made up of tasks. A task represents the HL7 message associated with an exchange of data in an action. For instance, an admit/visit notification is a task. 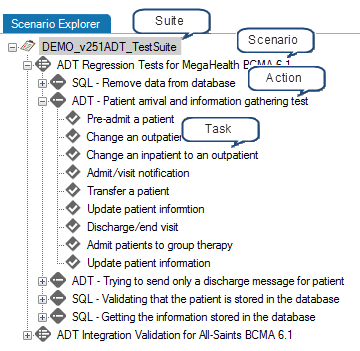